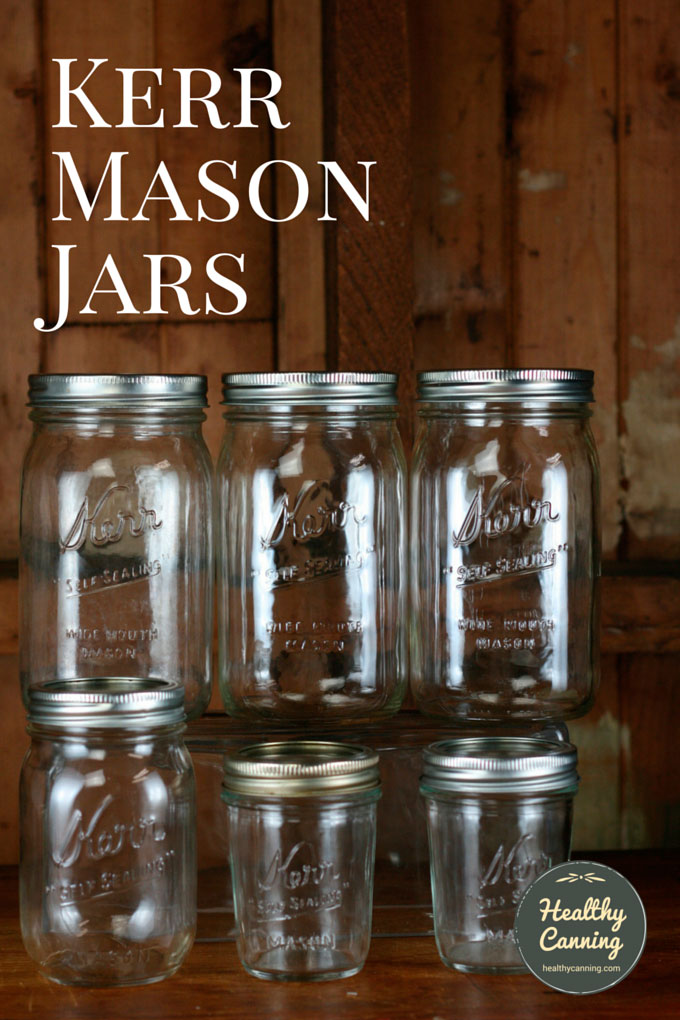 Kerr is a range of Mason jars for home canning. They can also be used for freezing, dry storage, and decorative functions.

Kerr has traditionally been primarily marketed in the western United States, where it has historically had a customer base loyal to the brand name.

Many people like Kerr jars because of the clean sides on the main, everyday jars in the Kerr product line. The clean sides, some people feel, allow labels affixed onto the jars to hold better. (Note: Not all Kerr jars are smooth-sided. The jelly jars have quilted-texture sides.)

The jars themselves are dishwasher safe. They take standard size mason jar lids and ring bands.

Note that, as for all mason jars, if you want freezer-safe ones you need to look for straight-sided jars.

The Kerr name for home canning supplies is owned by the Newell (formerly Jarden) company, which also owns the Ball and Bernardin preserving supplies companies  (info current as of 2016.) [1]It’s interesting to note that while Bernardin is owned outright by Newell, Kerr and Ball have also continued as separate companies outside the home canning field making other things such as beverage and medicine containers. Bernardin, along with Golden Harvest, are the two home canning names that Newell owns lock, stock and barrel.  Ball is primarily marketed in the eastern United States, while Newell tries to preserve Canadian sales territory for Bernardin. 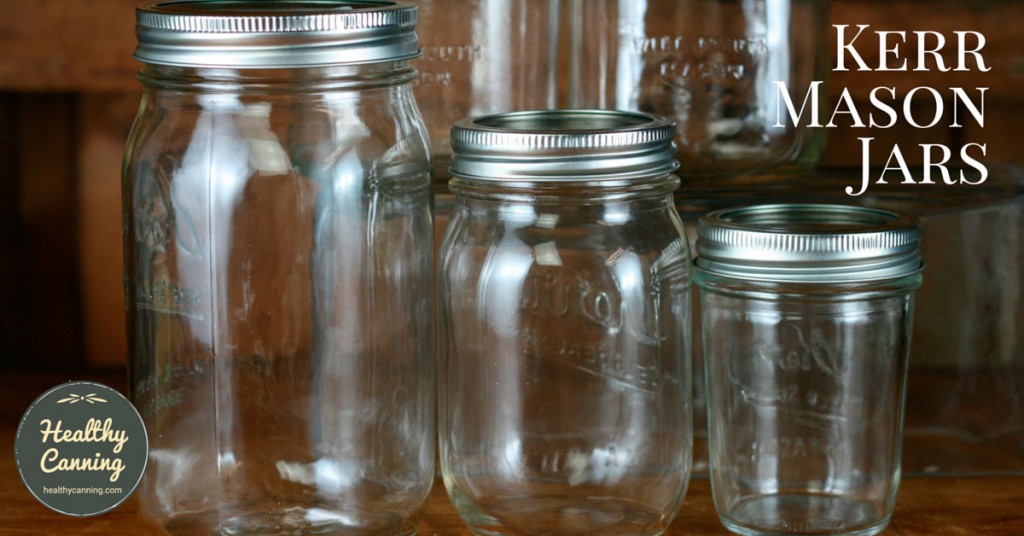 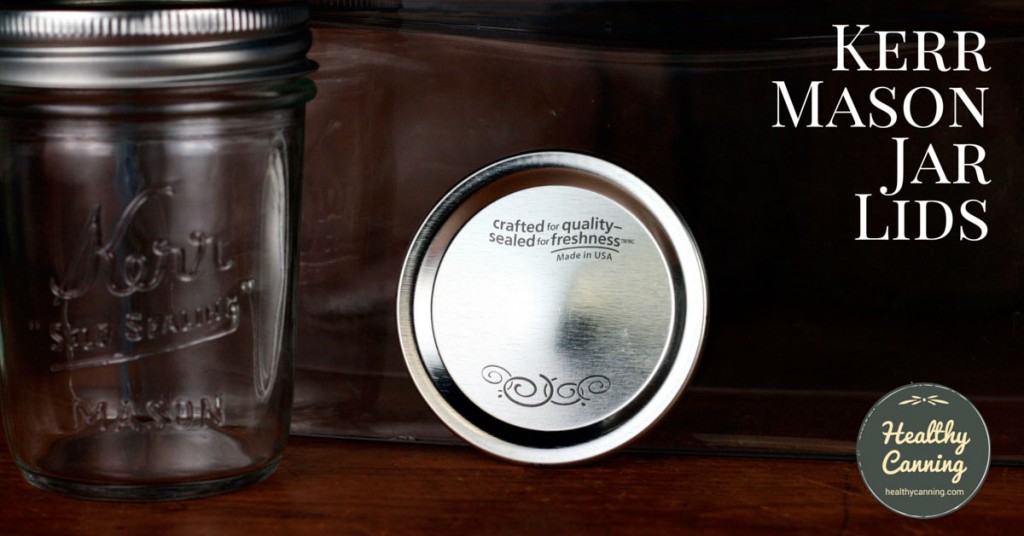 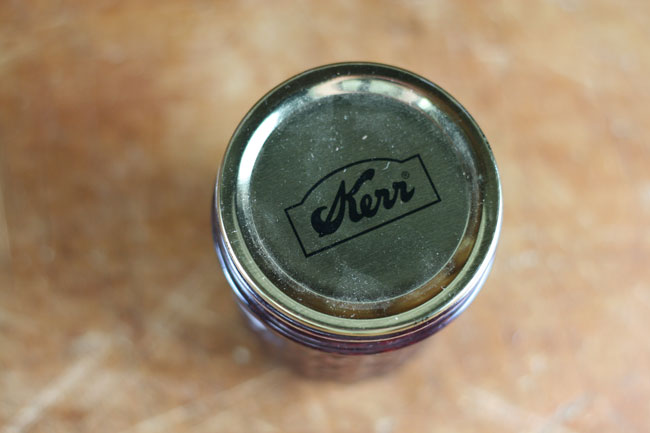 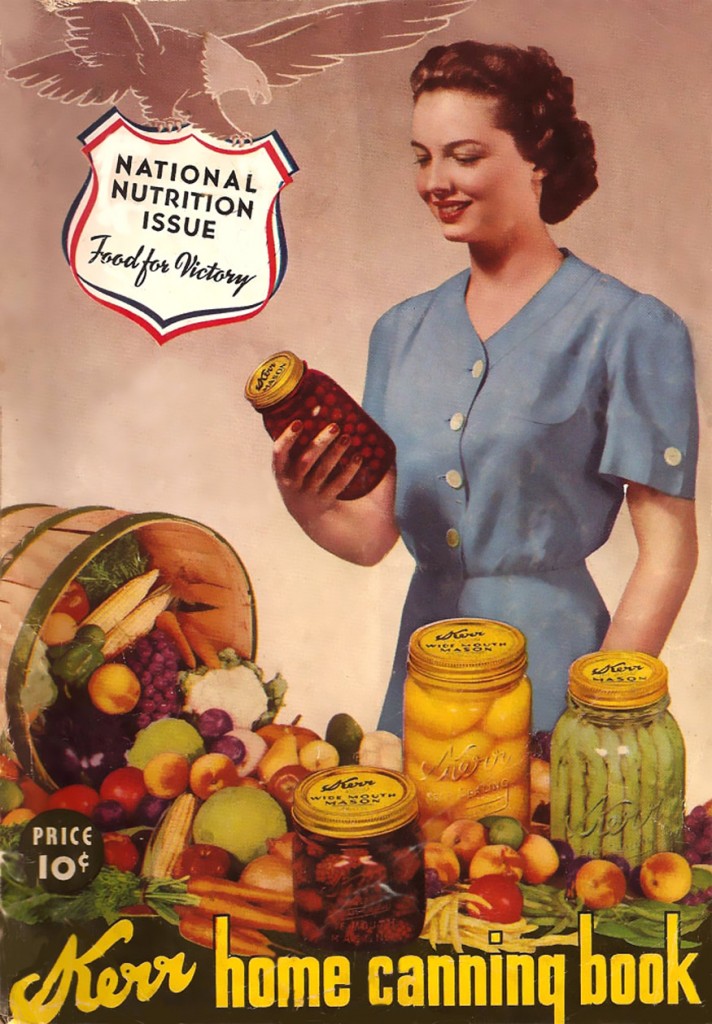 Kerr used to issue canning guidance and manuals, which was considered sound for its day. Advice such as: 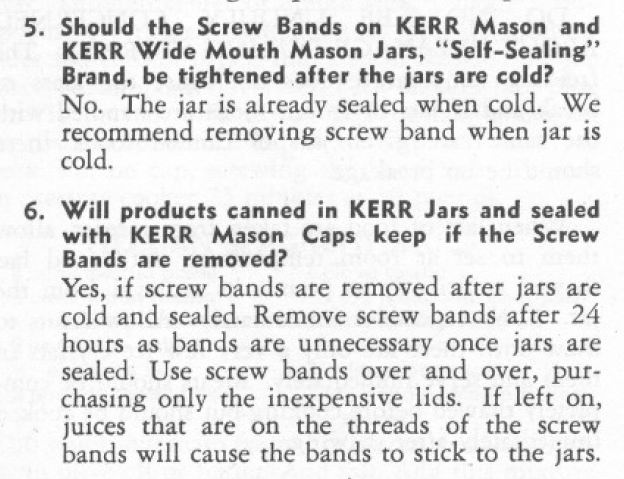 Canning publications appear to no longer be issued under the Kerr name. Newell issues them instead under the Ball and Bernardin names.

Any Kerr publications, as good as they were in the day, would now be considered out of date and should be referred to for historical interest purposes only. Use instead current publications from reputable sources, as much has been discovered in the field of home canning since Kerr’s knowledge transfer people were active. 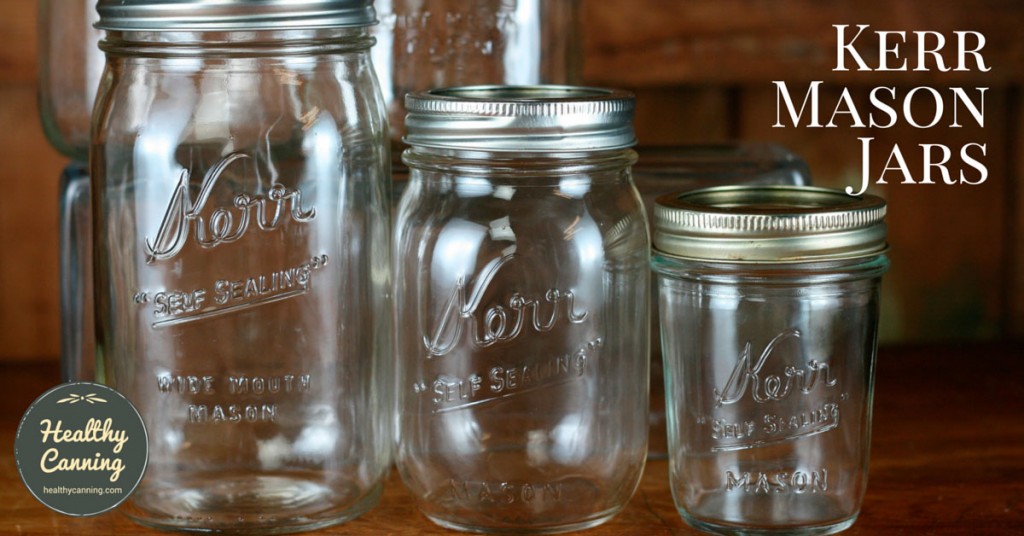 Are you a jar collector and want to find out about a particular Kerr jar you have? Try this web forum over on the Glass Bottle Marks web site.

While Ball now has all the recognition in home canning, it was actually Kerr who introduced two fundamentals we now use today: a mason-jar lid with the gasket affixed to its underside, and, wide-mouth jars. Ball copied these innovations.

After some basic schooling, he migrated west. He went first to southern Idaho, where he ended up in the retail grocery trade. From there, he moved to Portland, Oregon and worked in sales for a business named Mason-Ehrman; after that, he joined two other men to form a produce business named Richet, Roberts & Kerr.

In 1903, Alexander left that grocery business and with only $100 US started a company called either the Hermetic Fruit Jar Company or the Hermetic Closure Company (sources found to date disagree.) His partner was John Giles. The company made metal lids and spring clips. [3] Milner, Melissa. Fruit Jars – A history worth remembering. In: Bottles and Extras. Federation of Historical Bottle Collectors. Winter 2004. Page 30.

In 1904, Kerr changed the name of the company to the Kerr Glass Manufacturing Company.

His first jars were called “Economy” jars. They were not screw-on lids; they were clamp-type lids which had a rubber gasket attached to the underside of the lid, incorporating elements from a design patented by Julius Landsberger in 1903. The jars and their lids were very similar in operation to the Fowlers Vacola jars still used in Australia today. The Economy jars were made at Kerr’s Altoona and Sand Springs factories (see list below.) The company would go on to make the Economy jars until 1957, and replacement lids for them until 1961.

During those first years, Kerr did not actually make his own jars. He had two other companies manufacture them for him: the Illinois Pacific Glass Company in San Francisco, and the Hazel Atlas Company. [4]Kerr Glass Manufacturing Corporation. In: Lehman Brothers Collection – Contemporary Business Archives. Harvard Business School. Accessed June 2016 at https://www.library.hbs.edu/hc/lehman/company.html?company=kerr_glass_manufacturing_corporation

In 1909, Kerr finally had enough business to open his own first manufacturing plant, in Altoona, Kansas.

In 1915, he came up with another simple one-piece flat disc-and-gasket combination for lids, similar to the Economy lids design, but held in place during processing by a screw-on ring band instead. He called his lids, which are the ones we use today, “self-sealing” because after processing you don’t touch the lids at all; they will seal themselves. Other models at the time required you to re-tighten a lid, or snap down a clamp, as well as often using separate independent red rubber rings for the actual sealing. [5]Keefe, Joni. Farms Finest: Mason jars preserve food and American history. Aspen, Colorado: Aspen Times. 19 October 2014

In 1915, he moved his office to Sand Springs, Oklahoma, and then in 1919 to Los Angeles, California. They would remain there until 1992, though the company was incorporated in Delaware.

Up until the early part of the twentieth century, jars were produced with what is now considered a standard, regular mouth opening of approximately 2 ½ inches. It was Kerr who, in 1920, started producing jars with a 3 inch opening, which he dubbed “wide-mouth.” Soon thereafter, Ball copied the design and started producing wide-mouth jars as well.” [10]Moser, Joann. Mason Jar Nation: The Jars that Changed America. Cool Springs Press. 2016. Page 18.

By 1921, Kerr had begun selling jars in western Canada. 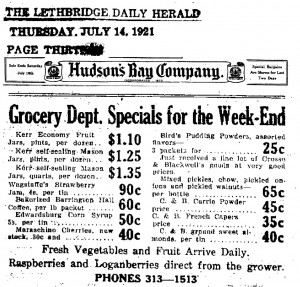 By the 1930s, jars with the screw-on ring bands were more popular than the Economy clamp-type models.

During World War Two, some Kerr jars shipped without their metal lids. A participant in an antique jar forum wrote,

In 1944, the company began putting AHK (standing for Alexander H. Kerr) on the bottom of some jars.

In 1970, the company finally went public.

In 1975, the company did a second public offering, to retire some debt and recapitalize. At the time, the company had seven factories, and 27 sales offices.

In the 1990s, Kerr began a period of erratic moves that some attribute to a poor leadership at the top:

The company ended up floundering under the direction of Roger Norian, according to one industry analyst, who said in Forbes, “Roger Norian hasn’t done much for Kerr Group, but he’s done very nicely for himself,” and noted that “Kerr had been profitable less than 50 percent of the time from 1982 to 1993, although Norian himself had received over $1.8 million in three years.”   [12]Funding Universe. Kerr Group Inc. History. Accessed June 2016 at https://www.fundinguniverse.com/company-histories/kerr-group-inc-history/

In 1992, it was decided that the company would rename itself to The Kerr Group. The company was no longer just a mason jar company, or even just a glass making company, at that. It was making different types of packaging, containers and closures for far more than home canning, including glass bottles for commercial condiment makers, etc. Kerr sold the division that made commercial glass bottles for packers off to the overall Ball Corporation in 1992.   [13] Nearly a decade later, in February 1992, the company sold its commercial glass container manufacturing business to Ball Corporation for approximately $68 million.” Funding Universe. Kerr Group Inc. History. Accessed June 2016 at https://www.fundinguniverse.com/company-histories/kerr-group-inc-history/

Kerr had, though retained ownership of its original domestic home canning jars, supplies, and lids division. They decided to try to expand in Canada, where previously they had only sold in the western half of the country:

In 1992, Kerr began to market caps, lids and jars in the Atlantic provinces and, shortly thereafter, it moved into the larger Quebec and Ontario markets.”  [15] Canadian International Trade Tribunal. Inquiry: CAPS, LIDS AND JARS SUITABLE FOR HOME CANNING, WHETHER IMPORTED SEPARATELY OR PACKAGED TOGETHER, ORIGINATING IN OR EXPORTED FROM THE UNITED STATES OF AMERICA. Inquiry No.: NQ-95-001. October 1995. Page 12.

In 1996, though, despite still having 45% of the U.S. market, and despite just having started to execute sales expansion plans, the company just gave up on the home canning supplies market, and sold that division to the Newell (named Alltrista at the time) company. Newell closed Kerr’s factory in Jackson, Tennessee  and consolidated Kerr and Ball production in Muncie, Indiana.

Until 1996, the company was a leading manufacturing of home canning supplies, through its consumer products business division, with an estimated 45 percent market share, continuing the work originally started by A. H. Kerr in 1903. Those operations included the manufacture and sale of caps and lids and the sale of canning jars and lids used by consumers for home canning of fruits, vegetables, jams, jellies, and the like, together with the sale of other related products, including iced tea tumblers and beverage mugs, and plastic dinnerware and drinkware.

Due to a combination of cyclical demand based on annual growing, harvest, and weather conditions; a shift in retail distribution channels for such supplies away from smaller specialty stores and into the larger mass-merchandise retailers such as Wal-Mart and Kmart (with concurrent lower profit margins); and little growth in the unit, operations for the consumer products division were discontinued. Certain assets of the division were sold in March 1996 to Alltrista Corporation for a purchase price of $14.5 million in cash and stocks. Alltrista, parts of which formerly belonged to Ball Corp., was another Muncie, Indiana-based company. The manufacturer of metal stamped jar tops, rubber jar rings, and glass jars for packing, founded in 1991, also produced zinc blanks used to make pennies. Revenues for Kerr hit in the normal range for the struggling company, at $107.4 million, but net losses mounted to $22.3 million. [16]Funding Universe. Kerr Group Inc. History. Accessed June 2016 at https://www.fundinguniverse.com/company-histories/kerr-group-inc-history/

Even though it’s no actually no longer in the home canning business, and has sold off the Kerr name in that product line to Newell, the main Kerr Group company is still in business today (2016) as a commercial packaging company: 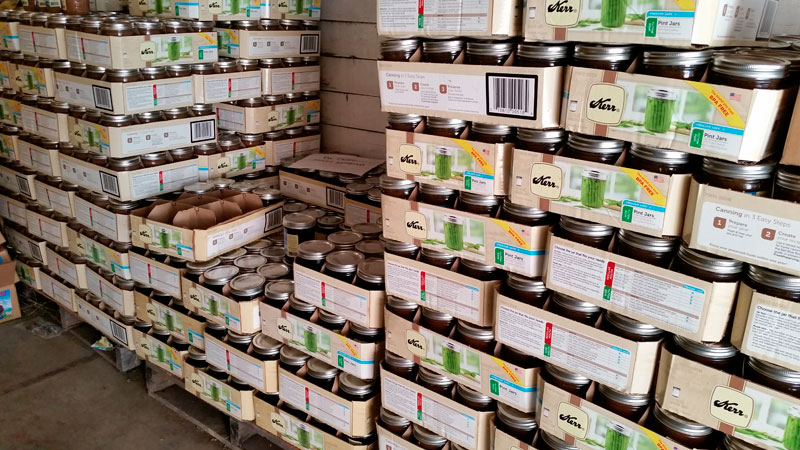 Kerr was a devout Christian; for many years every case of mason jars he sold had a pamphlet in it urging people to tithe to their churches. He himself credited his financial success to tithing.

Despite his devoutness, in 1910 he divorced his first wife (name unknown at time of this writing) to marry Albertina Sechtem (July 13, 1890 – October 17, 1911) on 29th September 1910. Sechtem, who at the age of 20 was 28 years younger than Kerr, worked for him at the Kerr Glass Company at Northwest Fourth Avenue and Hoyt Street, Portland, Oregon. It caused a scandal at the time. Kerr was already 48, and the father of two children — his son Thomas was graduating from Harvard that year. [18]Hauser, Susan G. Chef’s cheesecake is a sweet tribute to Albertina Kerr’s history and namesake. The Oregonian. 4 June 2013.

Albertina and Alexander had a child, named John (born June 1911).

In October 1911, Albertina died of typhoid. He remarried a third time, to a woman named Ruth.

….his son Thomas oversaw operations of The Kerr Glass Manufacturing Company, then located in Sand Springs, Oklahoma, until his own death five years later. Rose Kerr, Alexander’s third wife, took the reins in 1930 and her place as the first woman executive in the glass-blowing industry — if not one of the first women executives in manufacturing — in the United States.” [19]Moser, Joann. Mason Jar Nation: The Jars that Changed America. Cool Springs Press. 2016. Page 18.

In the western United States you should be able to find them in many stores.

You can browse for Kerr Jars on Amazon. When on Amazon, be sure to compare prices to ensure you are getting the lowest price with the best shipping deal. Walmart online also carries them.