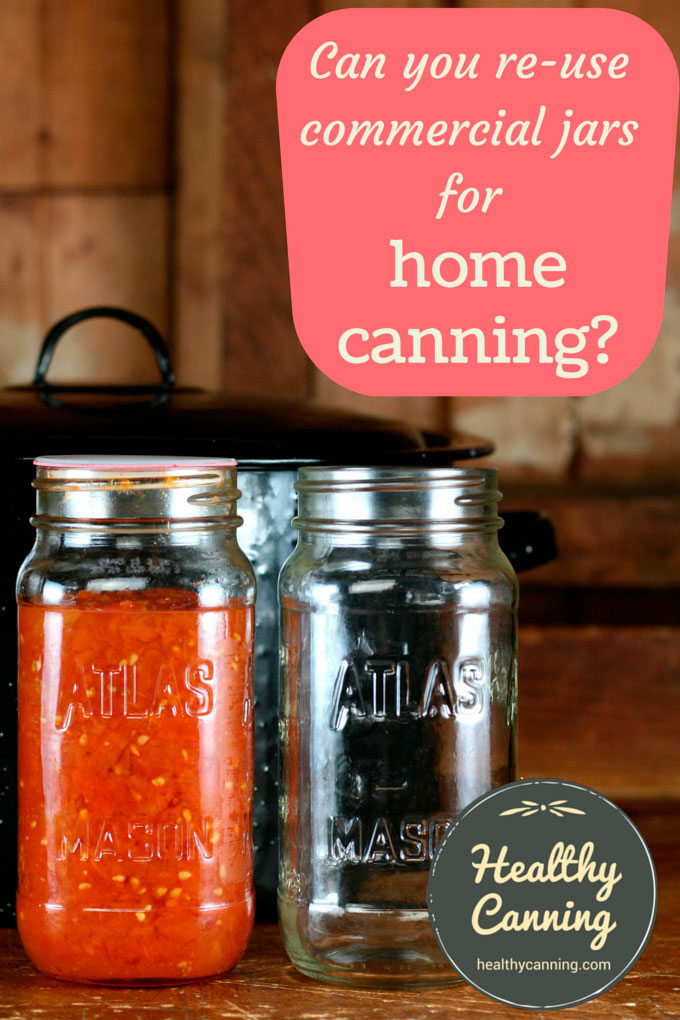 Can you use recycled glass jars as canning jars?

The answer depends on who you ask, and revolves around operational safety, rather than food safety.

No, don’t use recycled jars for home canning

Here are some responses from the “no, you may not” camp.

The University of Wyoming says,

Q: I have several peanut butter, pickle, and quart-sized mayonnaise jars I would like to use for canning. Is it safe to use these jars in a boiling-water bath canner or a pressure canner? — No! Mason-type canning jars are best because these jars have been specially tempered to withstand the heat necessary in the home-canning process. The jars asked about, however, make good refrigerator storage jars and are a perfect solution for picnic packaging needs, or they can be recycled at a local recycling center.”  [1] Griffith, Patti. The time is ripe for summer melons. University of Wyoming Cooperative Extension Service. From series “Canner’s Corner: Enjoying Summer’s Bounty.” Issue Two. MP-119-2. Accessed March 2015.

Never use commercial jars such as mayonnaise and pickle jars for home canning. These jars are not very resistant to temperature extremes; they break easily. Also, lids may not seal on these jars because their sealing edge is rounded rather than flat. Finally, the neck of the jar may be so short that the screw band will not hold the lid firmly in place during processing.”  [2] Fraser, Angela. Associate Professor/Food Safety Education Specialist. How Canning Preserves Food. Clemson University, Clemson, SC. Accessed March 2015 http://www.foodsafetysite.com/consumers/resources/canning.html.

Yes, you may use some recycled jars for home canning

Here are some responses from the “Yes, you may” camp.

Use of mayonnaise jars: The jar may blow-up, especially if used in a pressure canner, and it may be more difficult to obtain a good seal. However, if it seals, it is safe to use.”  [3] Brennand, Charlotte P. Avoiding Common (Major and Minor) Canning Mistakes. (Originally published 1999 as ‘Food Canning-Major Canning Sins’. Food and Health. Paper 31. September/October 2011 revision) USU Extension • Utah County. Office . Page 5. Accessed March 2015 at https://extension.usu.edu/utah/files/uploads/Newsletters/Avoiding%20Canning%20Mistakes.pdf.

Kerr, the company that invented the two-piece Mason jar lid, acknowledged the re-use of commercial jars and gave instructions for snugging the canning rings on them:

Our instructions to screw the bands tight mean as tight as the hand can screw the band without using a jar wrench. Use the full force of the hand. If commercial jars which are slightly wider across the neck than Kerr Mason jars, are used, it is especially important to use force in tightening the screw band, because the wide jar neck will ride out on the turned down end of the lid and this has a tendency to hold the lid up off the sealing edge of the jar.”  [4] Answers to your canning questions. Kerr. Page 53. 1948. Accessed March 2015.

Linda Ziedrich, respected author of The Joy of Pickling and other preserving books, says:

In place of mason jars you can use other glass jars, such as ones that held commercial mayonnaise, provided that the mouths fit the two-piece mason jar caps. If you use such jars, though, expect more failed seals and occasional jar breakage, since these jars have narrower rims and are less tempered. Some people use mayonnaise jars for pickles and jams, and reserve their mason jars for pressure canning, which puts more stress on the glass.”  [5] Ziedrich, Linda. The Joy of Pickling. Boston, Massachusetts: The Harvard Common Press. 2009. Page 22.

North Dakota Extension agrees. You can use them for water bathing, but avoid for pressure canning:

Some people like to re-use glass mayonnaise or salad dressing jars. The National Center for Home Food Preservation says that is OK if new two-piece lids are used. However, they have a narrower sealing surface and are tempered less than Mason jars, so expect more seal failures and breakage when reusing jars that once held commercial products. Don’t process mayo jars in a pressure canner, though.” [6] Julie Garden-Robinson, North Dakota State University Extension Service. Quoted in: Preserve your garden’s bounty safely with free resources. Farm Forum. 18 July 2016. Accessed July 2016 at https://www.farmforum.net/news/preserve-your-garden-s-bounty-safely-with-free-resources/article_62e9d6ff-394c-5b13-a920-780bb63dd965.html.

And finally, the “top authority” of them all, the USDA. They say you may use such jars, but give some operational cautions:

Most commercial pint- and quart-size mayonnaise or salad dressing jars may be used with new two-piece lids for canning acid foods. However, you should expect more seal failures and jar breakage. These jars have a narrower sealing surface and are tempered less than Mason jars, and may be weakened by repeated contact with metal spoons or knives used in dispensing mayonnaise or salad dressing. Seemingly insignificant scratches in glass may cause cracking and breakage while processing jars in a canner. Mayonnaise-type jars are not recommended for use with foods to be processed in a pressure canner because of excessive jar breakage. Other commercial jars with mouths that cannot be sealed with two-piece canning lids are not recommended for use in canning any food at home.”  [7] United States Department of Agriculture (USDA). 2015. Complete guide to home canning. Agriculture information bulletin No. 539.  Accessed March 2015. Page 1-14

The National Home Center for Food Preservation appears to present conflicting advice. It carries and offers the USDA’s advice verbatim, but then, in its on-line course, says not to use such jars:

Not just any jar will do. Use jars specially designed to withstand the high temperature of steam pressure processing and the low temperature of freezing. These jars will be labeled as canning and/or freezing jars.”  [8] National Center for Home Food Preservation Self Study Course. Module 2. General Canning:  Equipment Used in Canning. Accessed March 2015.

Not for fairs or contests

Sadly, your product canned in such jars may not be eligible for entry into fairs or contests.

Commercial jars such as the ones used for mayonnaise, peanut butter, coffee, tomato sauces, pickles, and jelly should not be allowed in the entry rules. Many of these jars cannot be recommended for home canning. Irregular shapes and volumes of jars can cause inadequate heat penetration during processing and an unsafe product may result. In addition, many of these jars are more likely to break during processing and are less likely to seal properly. If a product is canned in an unacceptable container it should not be judged.” [9]Elizabeth L. Andress and Allison M. Oesterle. Judging Home Preserved Foods. Georgia: National Center for Home Food Preservation. 2003. Page 11.

The reality in Australia and New Zealand

The reality in on the ground in Australia and New Zealand is this: that what Americans and Canadians pay for a dozen Mason jars, Australians and New Zealanders can easily pay for a single one, or two if they are lucky. Sic.

Consequently, there is great re-use of commercial jars for home bottling purposes, for both water-bath canning and pressure-canning. And North Americans cannot blame them; they would be doing the same in a heartbeat if they were in the same boat and having to pay 8 bucks per Mason jar.

Many people like to try to re-use such jars for canning as a political or lifestyle choice in order to be more environmental. But, it’s important to remember, that probably more people do simply because they are on such limited budgets that they just cannot afford the cost of store-bought mason jars. So perhaps the “harm reduction” approach of the “Yes” camp is more helpful than the approach of the “No” camp.

In that vein, here is a summary of the thoughts from above:

During World War Two, the USDA encouraged people to re-use jars from store-bought products owing to wartime shortages of glass. The various guidelines suggested were actually somewhat confusing, compared to the simplicity of just using the purpose-made mason jars now.

To be clear, this wartime advice is now superseded by current USDA advice. This is reproduced for historical research purposes only. 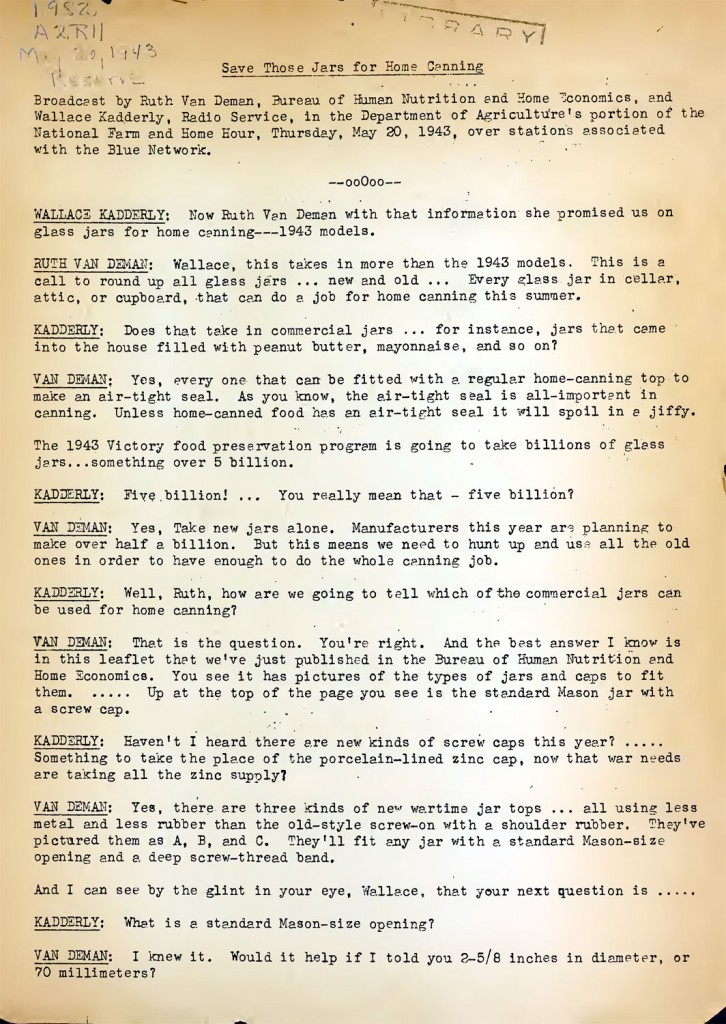 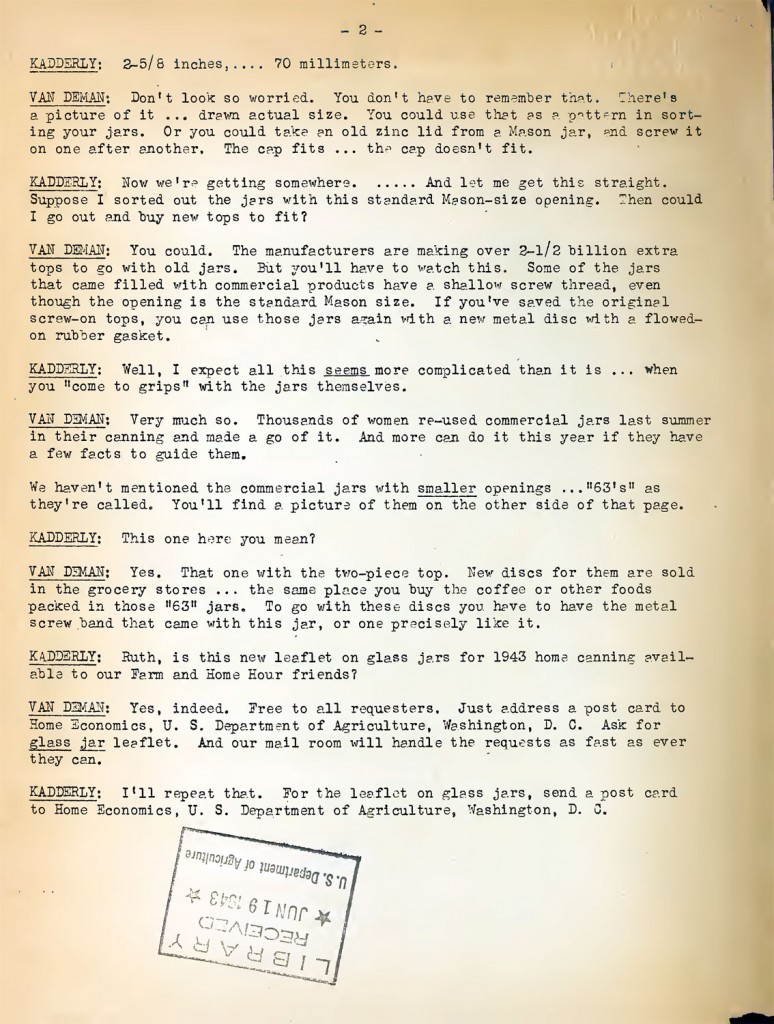 In 1986, Nancy Hudson, a former extension agent in Greene County, Ohio, explained the reason for the recommendation:

As of 1987, USDA will be recommending the use of one way jars such as instant coffee or mayonnaise jars to be used in a hot water bath canner only if the family has no other alternative However, these jars will not seal with the zinc lids and rubber rings…. With one way jars, the glass is thinner and will take a heat shock of only 75 F degrees. If the jar is at room temperature (70 F degrees) and the food is at 145 F degrees, you will have no breakage. However, with a one way jar at room temperature and the food at 190 F degrees, the jar will break.” [10] Hudson, Nancy. New research gives tips on using jars and lids. Xenia, Ohio: Daily Gazette. 7 April 1986. Page 6.

Note that in the quotes above, the USDA said, “These [commercial] jars have a narrower sealing surface and are tempered less than Mason jars…”  In 1996, someone in a different US government department (Customs), felt the exact opposite, or, misunderstood a memo they’d been sent from the USDA: ” ‘Mason-type’ jars have narrower sealing surfaces and are tempered less than most commercial pint and quart-size jars.”  [11] Department of the Treasury Customs Service. Tariff Classification of Imported Glassware. Federal Register Volume 61, Number 2 (Wednesday, January 3, 1996). FR Doc No: 95-31593. Pages 223-229. https://www.gpo.gov/fdsys/pkg/FR-1996-01-03/html/95-31593.htm