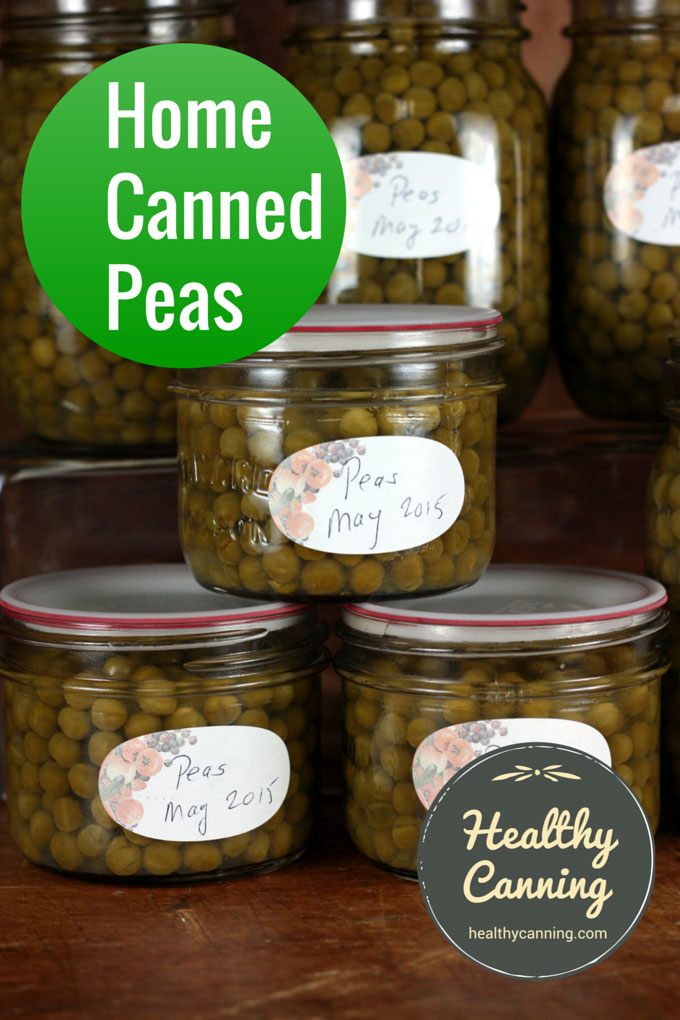 Peas can up very nicely.

It can depend on the variety, of course, but they do not end up dark or mushy as some people fear. Instead, they are appealing-looking, and delicious tasting.

On average, as a very rough guideline, expect to need about 325 g (11 oz) of podded peas per ½ litre (US pint) jar of canned peas

(To be clear, peas must be podded before canning.) 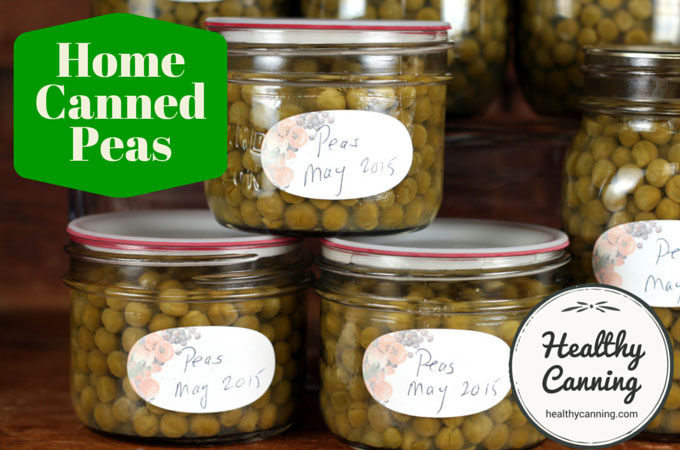 How to home pressure can garden peas

NOTE: You may also do peas as a raw pack. See peas over on the National Center’s site.

This recipe comes from both the USDA and Ball /Bernardin Complete Book.

Ball, Bernardin and So Easy to Preserve (2014, page 93) add that you should wash the peas again after shelling them.

The book, So Easy to Preserve, says, “Corn, peas and lima beans are starchy and expand during processing. They should be packed loosely.” [1] Andress, Elizabeth L. and Judy A. Harrison. So Easy to Preserve. University of Georgia Cooperative Extension. Bulletin 989. Sixth Edition. 2014. Page 115. 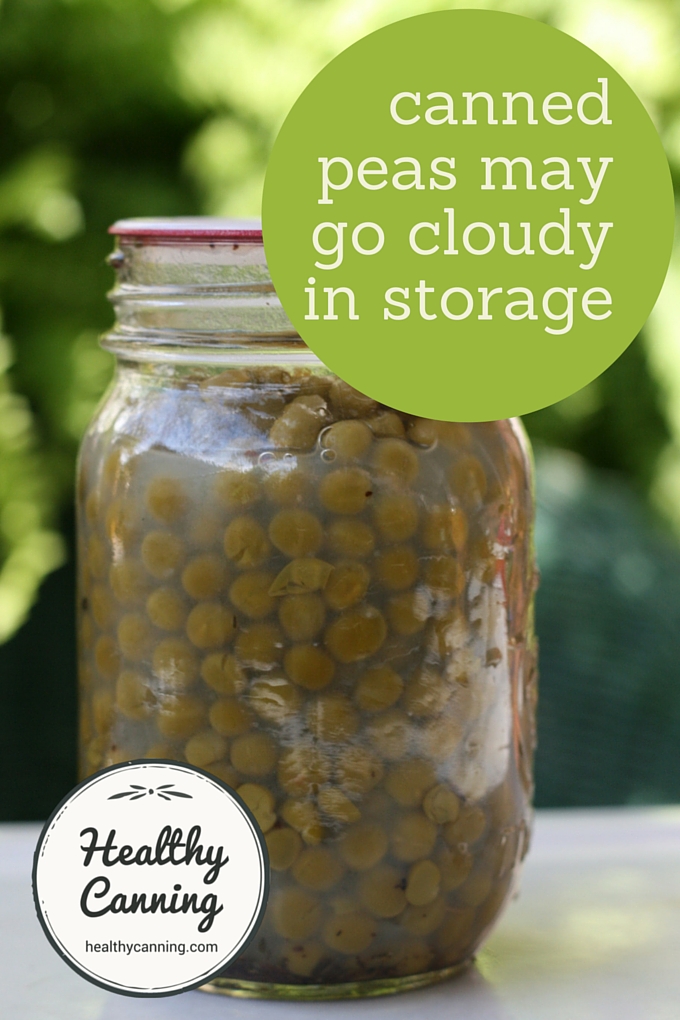 The above jar of peas has gone cloudy after a few months in storage. (The minor specks in it are herbs, Ball’s suggestion for Herbed Peas.)

Canned peas can go cloudy in storage owing to the starch in them.

If you have canned your peas following the USDA procedure for home canned peas, there is nothing to worry about.

We think of peas as “green vegetables”, but anyone on Weight Watchers soon learns that peas count as a carb. Peas, like corn, as they get older turn increasingly from “veg” into “carb.” Some varieties of peas can have a lot of starch in them, period. Even other varieties, as they mature, can exude a little starch after canning.

The starch in your jar should not, however, be a mass of starch so heavy that it is a gelled mass. If that is the case, the peas were very mature, and so starchy that the procedure for fresh green peas may not have been sufficient. [2] Source: Elizabeth Andress to Randal Oulton. 20 October 2015. Email on file.

But a light bit of cloudiness floating in the water as pictured in the jar above just indicates some normal starch in the peas (again, provided you know that the proper canning procedure was fully followed.)

This possibility of cloudiness may be why the Ball / Bernardin Complete Book suggests a hot water rinse after blanching, to get some starch off. If you are going to do that for a less cloudy appearance in the jar, then you probably also want to use fresh boiling water as the canning liquid instead of the blanching water. 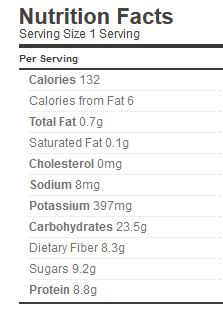 Peas must be pressure canned, no exceptions, because they are a low acid food. Botulism occurring from people trying to water-bath can peas was documented as early as 1919.

Seven cases of botulism were investigated by Dr E.C. Dickson of Leland Stanford Junior University School of Medicine during the winter of 1917 and 1918, and in four of those cases I succeeded in isolating Bacillus botulinus…. In two of those cases, vegetables were canned by the cold pack (one period) method. One of the cooks stated positively that she had kept the filled jars in a covered boiler with the water actively boiling for three hours. She did not, however, blanch the peas before placing them in the jars.” [3]Burke, Georgia Spooner (Stanford University). The effect of heat on the spores of bacillus botulinus. Its bearing on home canning methods, part 1. JAMA. 1919;72(2):88-92. doi:10.1001/jama.1919.02610020006002. 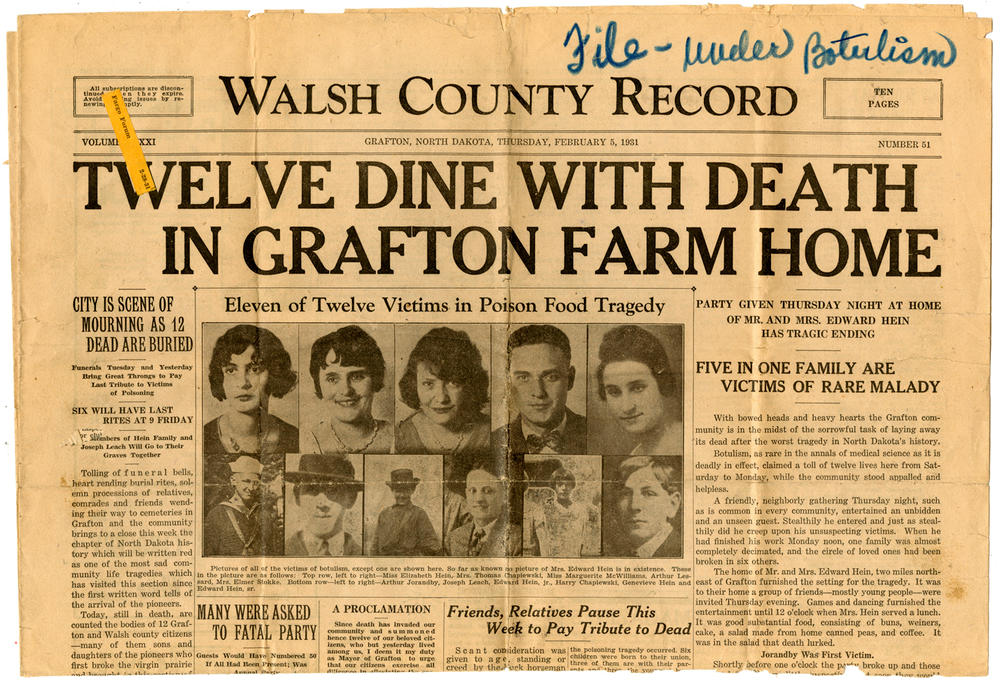 In June 2018, three women in New York City contracted botulism from improperly home-canned peas, which had been put in a potato salad.

“The patient who prepared the home-canned peas was a novice home canner. She used a peach preserves recipe with a boiling water technique, replacing the peaches with frozen [peas]. The patient was unaware that low-acid foods (e.g., vegetables) must be canned in a pressure canner rather than a boiling water canner to eliminate C. botulinum spores. After the jars cooled, the patient correctly checked for jar seal. One of the jars of peas was not sealed, so the patient covered and refrigerated it, and the family consumed the peas in the potato salad. The U.S. Department of Agriculture guidelines state that “foods in single unsealed jars could be stored in the refrigerator and consumed within several days” (1). However, this recommendation applies only to cans that have been correctly processed. In the absence of a pressure-canning step, C. botulinum spores were not eliminated, and the closed jar created an anaerobic environment allowing spore germination and BoNT production.” [4]Bergeron G, Latash J, Da Costa-Carter C, et al. Notes from the Field: Botulism Outbreak Associated with Home-Canned Peas — New York City, 2018. MMWR Morb Mortal Wkly Rep 2019;68:251–252. DOI: http://dx.doi.org/10.15585/mmwr.mm6810a5external icon.