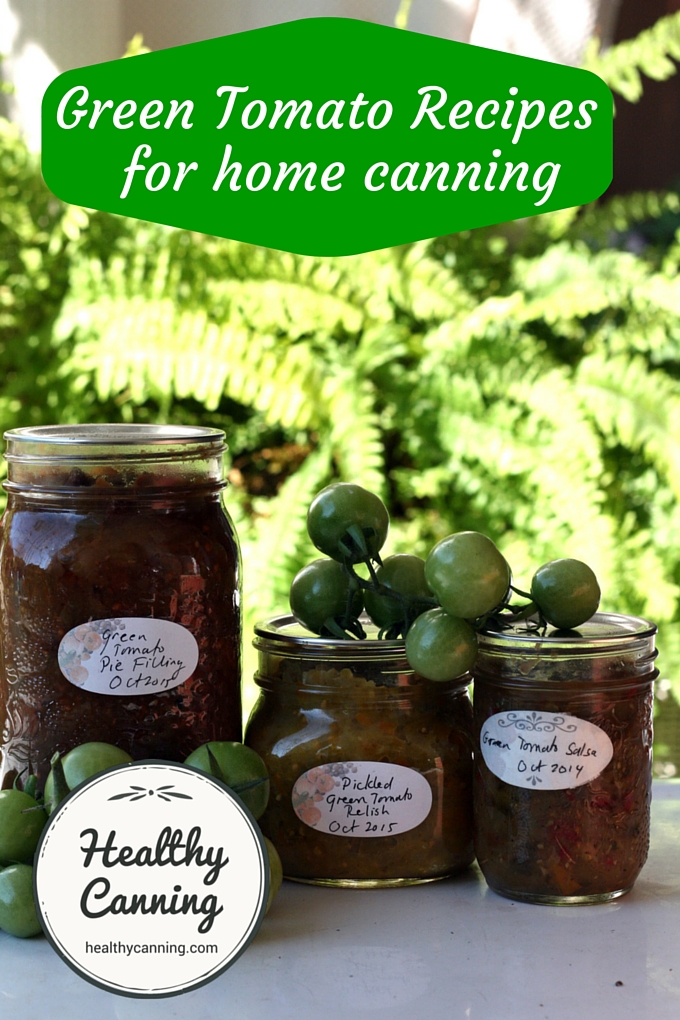 Green tomatoes are tomatoes that are picked before they ripen (usually to red.)

They are very tart tasting, because they are more acidic than ripe tomatoes. Tomatoes increase in sweetness and drop in acidity as they ripen more.

For a home canner, green tomatoes are gold, because while so many delicious and prized canning recipes call for them, they can be hard to get in today’s urban, perfect supermarket world.

If you want to just get right to the recipes, here’s the link for recipes that call for green tomatoes.

These tested recipes are from various sources such as the USDA, Ball, Bernardin, etc.

Note that green tomatoes can also be canned plain, on their own, as you would whole or crushed tomatoes. At the start to its plain tomato product canning section, the USDA Complete Guide to Home Canning says:

Green tomatoes are more acidic than ripened fruit and can be canned safely with any of the following recommendations.” [1]United States Department of Agriculture (USDA). Complete guide to home canning. Agriculture information bulletin No. 539. 2015. Page 3-5

For canning green tomatoes in a jar on their own, however, the University of Wisconsin adds this advisory note:

Do not ripen green tomatoes indoors for canning, the proper acidity may not develop. Instead, harvest green tomatoes from late season or frost-damaged vines and use these green tomatoes in a relish or salsa.” [2]Ingham, Barbara. Take Steps to Ensure a Healthy Harvest. University of Wisconsin-Madison. Page 1.

So rather than trying to ripen green tomatoes indoors off the vine to some shade of pink or red, and then treating them as “regular tomatoes”, you should use them as green tomatoes in a condiment recipe, where tons of acidity is added naturally anyway for the recipe. 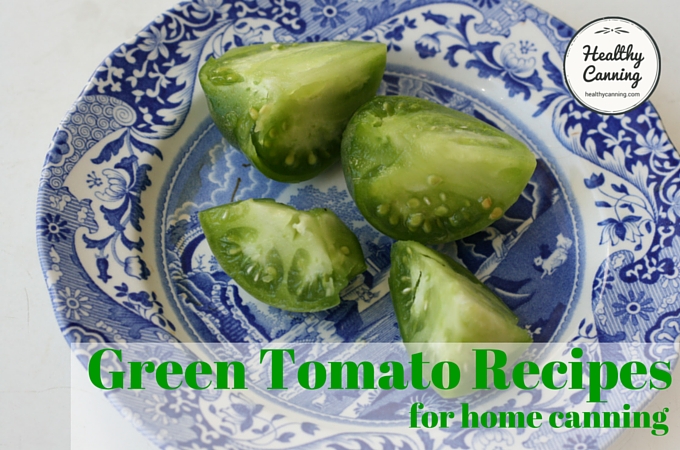 Some home canning recipes for green tomatoes may rely on them for their firm, “dry” texture. They aren’t very juicy or watery. Rather than going into a “mush” as ripe tomatoes will when chopped, green tomatoes chop up instead into a fine, firm dice, like cucumbers. This makes them useful for things such as Green Tomato Relish. 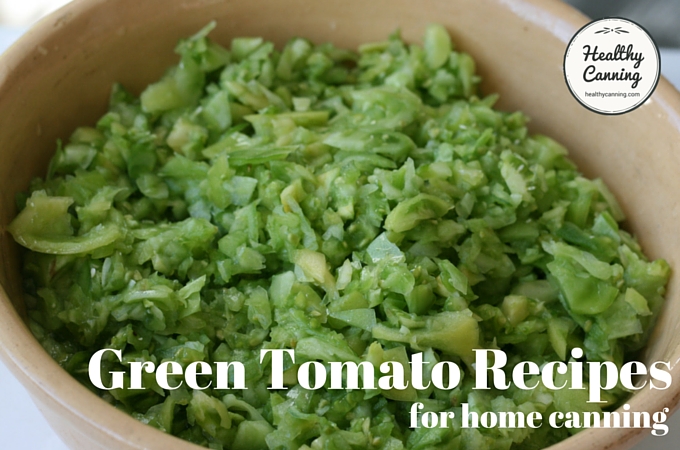 Others recipes may rely on them for their high acidity to make that recipe safe — recipes such as Kosher Dilled Tomatoes, which uses a weak brine, certainly relies on the green tomatoes having their own natural high acidity to keep the recipe safe.

So when a recipe calls for green tomatoes, use them and not ripe tomatoes. The only safe substitution that may be made for green tomatoes is swapping in tomatillos, as they also are very acidic, if not moreso. The USDA’s table of “Approximate pH of Foods and Food Products” assigns a pH value of 3.83 to tomatillos.  [3] USDA. Center for Food Safety and Applied Nutrition. Acidified and Low-Acid Canned Foods. April 2007. Accessed March 2015.

You can use green tomatoes instead of tomatillos in approved salsa recipes, according to the University of Wisconsin extension service: 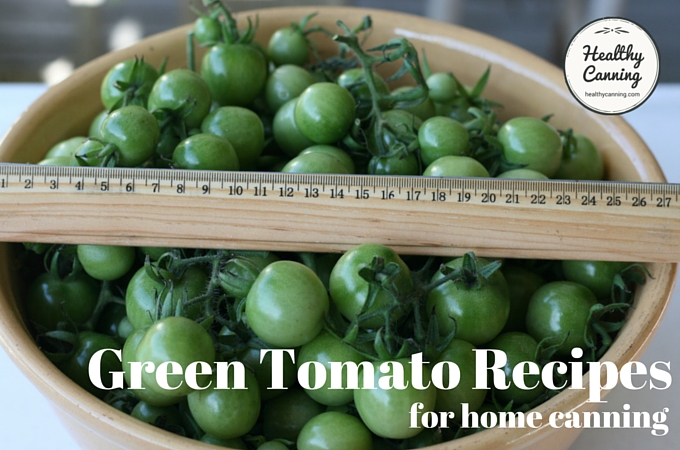 Green tomatoes for pickling whole as a pickled thing in their own right, as opposed to an ingredient in relish or chutney, should be about a max of 3 cm (1 inch) wide. Larger ones are usually chopped up for use in a mixture.

The authors of the Ball / Bernardin Complete Book are uneasy about the solanine in green tomatoes.

While green (unripe) tomatoes can be safely used as an ingredient in many home canning recipes, we don’t recommend preserving them as a stand-alone item. Green tomatoes contain a compound called solanine, which can be toxic if consumed in large amounts. Moreover, solanine — like other alkaloids, such as caffeine — contributes an astringent taste to foods that must be balanced by sweeter fruits, vegetables or sugar. The darker the green, the higher the tomato’s solanine content. The safest strategy is to use only pale green tomatoes or those tinged with red. If you have a supply of green tomatoes, you can ripen them considerably by placing them in a brown paper bag or between layers of newspaper until the intense green pales.” [5] Kingry, Judi and Lauren Devine. Bernardin Complete Book of Home Preserving. Toronto, Canada: Robert Rose Inc. 2015.  Page 352.

Note that this is not a concern that has been officially expressed by the USDA or officially by any member of the Cooperative Extension System.

How to get green tomatoes

Many people get green tomatoes simply by growing tomatoes, and harvesting them early, or waiting till the end of the growing season and seeing what isn’t going to ripen in time before the onset of winter. Many urban canners grow tomatoes in containers on a balcony, porch, etc, expressly to get some green tomatoes at the end of the season.

You’ll rarely, and perhaps never, see them sold in stores. Some people say they’ve had luck asking their green grocer, or produce department manager at their local supermarket to order some in for them.

___________________________
Note: this topic does not refer to the heirloom tomato varieties that stay green when they are ripe, such as German Green, Emerald Giant, Green Giant and Green Zebra. They are ripe, and so won’t have the same low pH / high acidity that home canning recipes are often counting on in actual unripe green tomatoes. 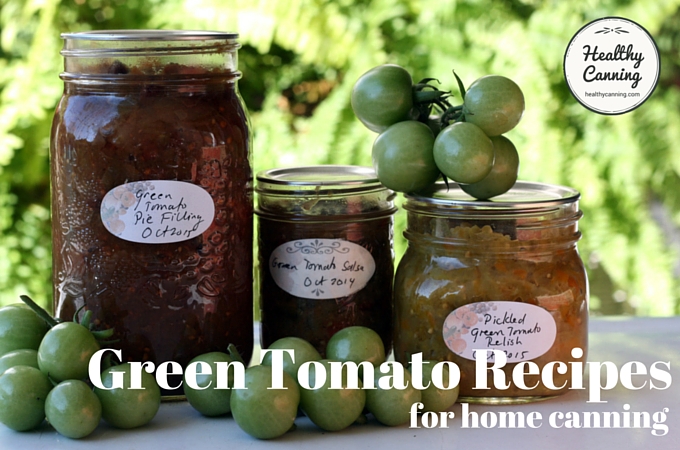